This week's Double Take is a little late, so I hope you will forgive us (well, I hope you will forgive me, it's my fault it's late). I got my days of the week confused and thought Thursday was the 14th instead of the 13th, and the 14th is Daring Cooks post date, so I didn't want two posts on the same date. But this also means I didn't have to think about making something new and creative to post this week since my normal post date is Sunday. And isn't it always nice to get a surprise on a blog? Instead of a regular post, you get a Double Take! You can find this week's Double Take recipe in the all-new ultimate Southern Living Cookbook on page 118.

I've generally avoided bready breakfast casseroles, but the ingredients were simple and flavorful, so I thought I'd give this one a try. Plus, how can you go wrong with Italian sausage? 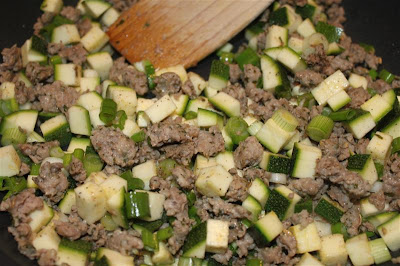 Superb veggie chopping skills!
If you made the quinoa, you've honed your chopping skills, so chopping the zucchini and green onion for this recipe will be a breeze. Mine were actually quite pretty! This recipe called for sweet Italian sausage, and I generally make hot, so I went looking for a new recipe. Rachael Ray had a decent one for sweet Italian chicken sausage, so I adapted that for my recipe. So, chop your veggies, sauté and drain your sausage and then add the veggies and sausage back to the pan and cook until the veggies are tender. And some diced roasted bell peppers in the last few minutes of cooking. The recipe specifically calls for red, but I could only find a jar of grilled red and orange bell peppers. Yep, I made another recipe with bell peppers. Gosh this book likes bell peppers. Expect something completely different next week. Season with salt and pepper. 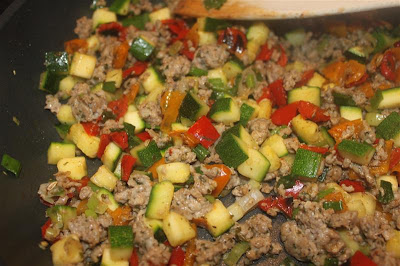 Gorgeous colors
Cool the mixture. Okay SLC, what the heck does that mean? Should it be cool to the touch or warm or just so it doesn't scramble the eggs or melt the cheese? A little more info would be great here! I let it sit in the warm pan off heat for about five minutes b/c I was tired and ready to move on to the next step. Next time I'll probably chop the bread during this stage so I don't rush it. Add half of the bread cubes to a greased casserole dish, followed by half of the sausage veggie mixture and half of the cheese. Repeat.

Whip some eggs with milk (~ equal parts egg and milk), pour over the top of the casserole and set it in the fridge for 8 hours. Needless to say, mine was in there for longer than 8 hours, probably closer to 12. I just made it before I got too tired the night before and popped it in the oven when Hubby got up the next morning. So here's the kicker, this thing bakes for a hour. I understand that you want to use low heat with eggs, but that's a long time to let things cook first thing in the morning. You have to be prepared. Since my oven temp is wacko, I heated the oven for about 10 minutes then turned off the heat, hopped in the shower and turned the heat back on for about 10 minutes after I was out and dressed. It ended up working quite well. This process is much easier if you have an oven that performs properly and turns off the heat when it reaches the correct temperature. Now that I think about it, an hour doesn't seem too terrible for something to cook in the morning if you aren't in a rush. Put it in the oven first thing (seems like a cold oven would be good to start with here), take your time getting ready for your day (or rush to get an entire family ready for their day), and then breakfast is ready after you've been up long enough to be somewhat hungry. Sounds kinda perfect. 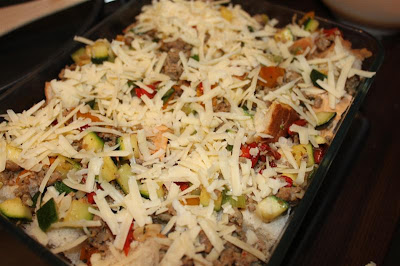 Ready to go into the fridge
I was worried about the bread, but it turned out just fine. Some pieces absorbed the egg completely, but some didn't, which added a nice crunch to the casserole. Oh my, and the flavor profile was surprising. I wasn't expecting too much since the seasonings were simple and I thought the bread would overpower everything else. But the flavor was actually way too much for Hubby who'd been eating bland hospital food for the past 11 days. I reheated a couple pieces in the oven the next day (which worked quite well) and he enjoyed it a bit more!

Notes: I halved the recipe and we each got a sizable chunks 3 days in a row. These chunks kept me full for 4.5 hours, which is way better than cereal.  The recipe states that it feeds 8, but I'd say it easily could feed 12. I do have to make a small confession. I doubled the sausage accidentally-on-purpose. The recipe calls for a half pound, and reducing the recipe meant I needed a quarter pound of sausage. And I didn't want to go up to the counter and ask for only 100g of meat. So I asked for 200g. And threw it all in there b/c 100g just didn't sound like much. Ready for the tummy, complete with veggies!
Posted by Melanie at 5:00 AM