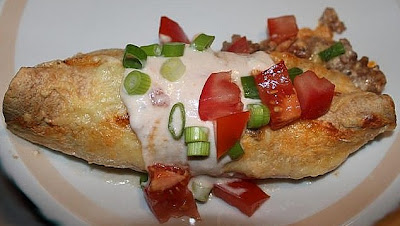 Oddly enough, I served these enchiladas the same day as my stuffed grape leaves. With The Dude around to help us, I knew we wouldn’t have much in the way of leftovers, and I couldn’t imagine these reheating well. I had to change up the recipe a bit because 1) I refuse to use packets of taco seasoning mix even if Old El Paso brand is now available in , 2) No cans of chopped green chiles here, and 3) No cans of cream of chicken soup either. But I made do, and everyone was quite pleased with results. Except, maybe, our waistlines. I made the mistake of looking at the nutrition facts. Yikes. So, here you will see my slightly adapted version which has considerably less fat, but I didn't lose any of the taste! :) To reduce the fat and calories, I cut the amount of sauce used. They are still smothered, but have the added bonus of not being overwhelmed by the sauce, so you get some crispy tortilla in there, too. Which makes it that much better and tastier. Yay for reducing unneeded fat and calories!
Smothered Enchiladas
adapted from the all-new ultimate Southern Living Cookbook, original recipe also available here
Ingredients 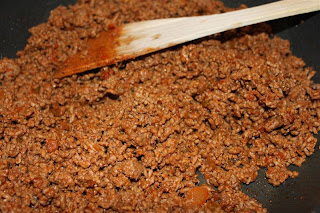 Brown ground beef in a large skillet, stirring until it crumbles and is no longer pink; drain. Stir in chili powder, cumin, oregano, and half of the salsa; set aside.
Stir together remaining salsa, soup, and sour cream. Pour half of soup mixture into a lightly greased 13- x 9-inch baking dish.
Spoon beef mixture evenly down centers of tortillas; roll up. Place, seam sides down, over soup mixture in baking dish; top evenly with remaining soup mixture and cheese.
Bake at 350° for 25 minutes or until thoroughly heated. Garnish, if desired. 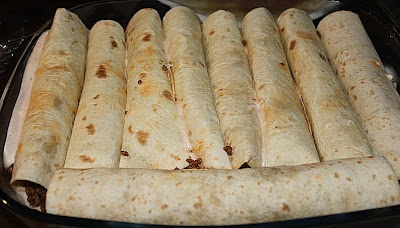 Melt butter in a saucepan over medium-low heat. Stir in flour; keep stirring until smooth and bubbly. Remove from heat and add the chicken broth and milk, a little at a time, stirring to keep smooth. Return to heat. Bring sauce to a gentle boil; cook, stirring constantly, until it thickens. Taste and add salt and pepper, as needed to taste.
Use in casseroles in place of condensed cream soups. 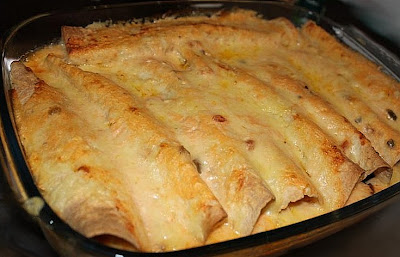 Cheesy, bubbly, browned goodness fresh from the oven. Check out those crispy edges!

THOUGHTS:
Oh my, these were tasty. The sour cream sauce does not taste like sour cream, but rather like savory creamy goodness. I actually did not halve the sauce when I made this recipe the first time, but as I was adding it to the unbaked enchiladas, I couldn't bring myself to add it all because I like some crunchy in my tortilla as well, so I had a little extra to add as a garnish on top. I still ended up with leftover sauce, so I think halving the sauce will only enhance this recipe.


The tortillas were a bit messy to roll because I used the smaller taco shells instead of burrito shells, but that being said, it was still a very easy recipe to make. Everything comes together quickly. You could easily replace the meat with beans and corn for a vegetarian option, or if you like beans, reduce the amount of meat and add a can of beans. Bender would have preferred the garnish inside the tortillas, but The Dude enjoyed it as is. Feel free to play with the filling! 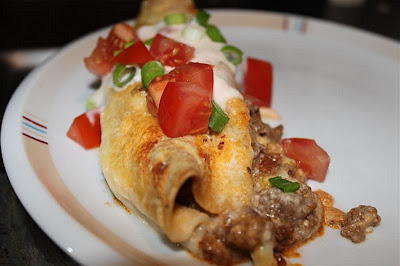 
For Tabitha's Take on Smothered Enchiladas, head on over to Double the Garlic!