Macaroni and cheese is a staple in our house (er, tiny apartment). I’ve tried over a dozen recipes and generally come back to two: my grandmother’s recipe and a cheese sauce based recipe. The recipe for Golden Macaroni and Cheese from the all-new ultimate Southern Living Cookbook looked most similar to my grandmother’s as it does not require a roux. But like my grandmother’s, it looked unassuming and boring. But I was also interested in finding a non-roux recipe that did not call for eggs (I made the mistake of serving that recipe to someone who was allergic to eggs once… eek!), so I thought we should give this one a day.
The original recipe made 8 servings, so I decided to halve the recipe since it was just the two of us. At the last minute I discovered that I did not have quite enough Cheddar, so I supplemented with Parmesan rather than going to the store. The second time I made this recipe, I forgot to use Parmesan and discovered the Parmesan gives it that lift that brings this recipe over the top to fabulous. The recipe listed here is what I used the first time I made it. 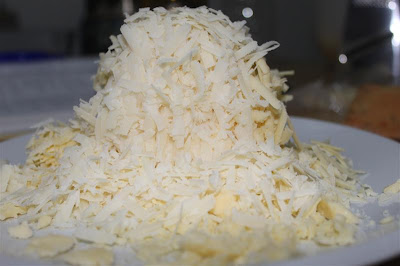 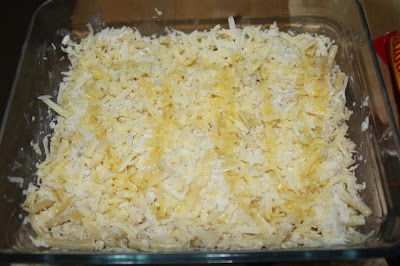 Ready for the oven!

THOUGHTS:
I was quite nervous about using the onion salt. One of the many mac and cheese recipes I’ve made Hubby try is Lynne Rosetto Kasper’s 21st Century Mac and Cheese and he did not like it at all because of the onion (I didn’t care for the first bite either, but it really grew on me). So I skimped a little on the onion (onion salt as such is not available here, so I made my own with equal parts ground dehydrated onion and salt) and used ground mustard when I made it again this week. Frankly, we both preferred the version with the onion salt to the mustard (though both got eaten, don’t get me wrong). So I guess that pretty much sums up how we felt about this recipe: I made it twice before posting it. Ultimate heaven on a plate. 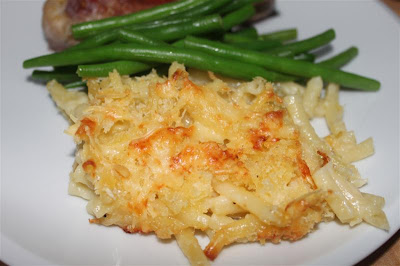 Don't worry, you get to see the whole plate next week!
VERDICT:
Follow-the-changes-I’ve-made-and-you’ll-be-a-fan: 2 votes!


For Tabitha's take on Golden Macaroni and Cheese, head on over to Double the Garlic!
Posted by Melanie at 1:00 PM